The goal of our lab is to identify and understand the underlying pathology behind chronic dry eye using human subjects, in vitro studies, and murine models of the disease. Dry eye syndrome (DES) affects millions of individuals worldwide, results in chronic ocular discomfort, reduces one's quality 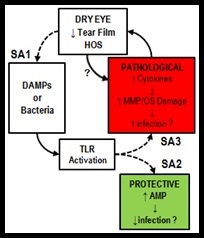 of life, and can be responsible for diminishing one's level of productivity. DES is often due to an immunoresponse that results in a runaway inflammatory response. This runaway inflammation can end up causing a vicious cycle of ocular surface pathology in which an increase in cytokines, matrix metalloproteinases (MMPs) related damage, and hyperosmolar stress (HOS) causes a decrease in either tear volume or quality leading to an increase in damage associated molecular patterns and risk of infection, either of which can activate toll-like receptors (TLRs) that then cause a further increase of cytokine and MMP/HOS related damage that cause a perpetuation of this cycle.

There is an increased risk for corneal ulceration related to DES, and yet the risk for infection is debated despite ocular surface pathology. The pathogenesis of DES inflammation is not fully understood and current treatment strategies focus primarily on alleviating symptoms and often do not produce the desired effect. Past studies suggest that reduced tear volume in DES results in HOS which stimulates the release of pro-inflammatory cytokines and MMPs, leading to immune cell recruitment and disruption of the ocular surface. Data from our laboratory suggest that TLRs may be involved in dry eye inflammation and we currently propose that endogenous damage-associated molecular patterns (DAMPs) activate TLRs which stimulate cytokine and MMP release, thereby adversely impacting DES inflammation. We have found that HOS and DES modulate the expression of TLRs on the ocular surface epithelium in humans and in mice with experimentally induced dry eye (EDE) and TLR activation at the ocular surface in EDE mice induces significant corneal ulceration, a clinical sign often seen in patients with severe DES.

DAMPs are molecules responsible for initiating and perpetuating an immune response in a noninfectious inflammatory environment. DAMPs result from cell apoptotic and necrotic cell death; when nuclear or cytosolic proteins are released outside of the cell or exposed resulting from tissue injury they act as a kind of red flag for the immune system. 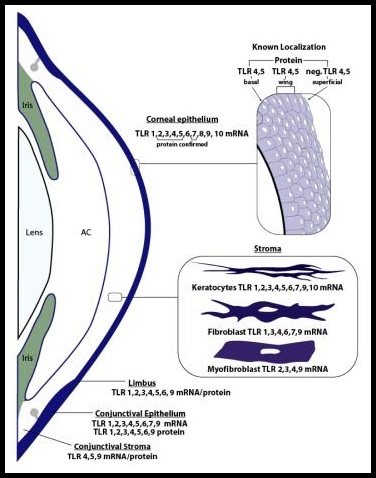 These molecular patterns, usually found within the nucleus or cytoplasm of the cell, when exposed to the extracellular matrix act as an alarm (DAMPs not released from apoptotic cell death can be referred to as Alarmins) that can either directly or indirectly promote adaptive immunity responses. DAMPs include high mobility group box 1 (HMGB1), S100 proteins, heat shock proteins, and IL-1?, all of which play an active role in perpetuated inflammatory responses. HMGB1, for example, is found at variable levels within most cells and binds to nucleosomes as well as promotes DNA bending. When a cell dies in a non-programmed manner HMGB1 is released into the extracellular matrix, however when a cell becomes apoptotic they modify their chromatin in such a way that HMGB1 is bound irreversibly and not released upon cell death. There is a natural level of extracellular HMGB1 however, what is passively released by necrotic cells as well as what is actively secreted in response to inflammatory stimuli such as pathogen-associated molecular patterns, and as such HMGB1 highlights the convergence of molecular functionality within the body in reaction to both infection and trauma. These DAMPs are thought to activate TLR receptors regardless of the means by which they enter the extracellular matrix, and it is this relationship and its effect on DES that we are attempting to discover.

TLR activation also plays a protective role by stimulating the secretion of antimicrobial peptides (AMPs) and enabling the innate immune response against microbes. This scenario is consistent with the clinical presentation, as concomitant microbial infections are not common in DES, and is supported by our data showing that TLR activation stimulates the production of AMPs in human corneal epithelial cells that are capable of killing Pseudomonas aeruginosa. Thus, determining the role of TLRs in DES inflammation is imperative for developing novel therapeutic agents that dampen the inflammation without increasing the risk for infection. We propose that DAMPs are increased on the ocular surface in dry eye and can activate TLRs to increase the production of damaging pro-inflammatory cytokines and MMPs while also enhancing pathogen protection through the production of AMPs. We are currently in the process of testing this hypothesis.